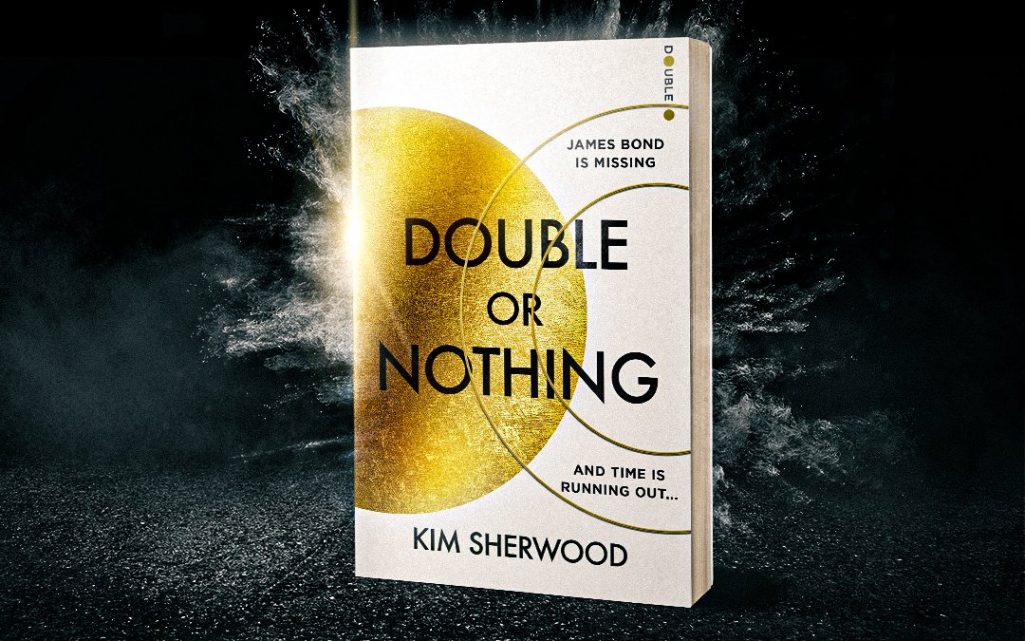 Ian Fleming Publications and Harper Collins have today published an exclusive extract from Double or Nothing by Kim Sherwood in The Times UK.

Double or Nothing will be published in Australia by Harper Collins on 7 September, 2022.

Moneypenny waved to the window. “Sorry to be back?”

Moneypenny was caught by that, but continued: “In that case” — sliding a tablet across the desk — “take a look at this.”

004 had come up through Special Forces with a heavyweight’s build, 6ft 4in and 14st of muscle, shoulders straining against the pink shirt he wore unbuttoned at the throat with a loose purple tie, and midnight-blue trousers. His sleeves were rolled to his elbows. Dryden always had the air of a man relaxing at the end of a long day, despite ticking nearly every box of what experts called operator syndrome, one symptom of which was hypervigilance — the legacy of being a killer since he was 16 years old. But, as 004 said, it was peace he couldn’t figure, peace that had spun him out. Here, ready to jump into danger once more, his looseness came with the reassuring solidity of authority — a soldier who knew he could command any situation and didn’t need to prove it. When Moneypenny first sat beside him, she’d been struck by the rumble of laughter from so deep in his chest, the languid survey of the room, and his ramrod back. She believed that if she simply took a seat beside him on the Tube, she’d wonder: who is this man?

Joseph Dryden’s name first crossed Moneypenny’s desk after an IED in Afghanistan fractured the base of his skull and lacerated the vestibular nerve beneath his right ear, cutting the wire and leaving him sensorineural deaf on one side. The shock wave that followed resulted in a mild traumatic brain injury and damaged the language centre in the brain, meaning his left ear received speech as a wall of sound which took huge effort to discern and comprehend. Dryden was medically downgraded. Then he faced a medical board. Then he was exited from the military. That was when Moneypenny made him an offer. Dryden’s close-cropped hair gave no indication of the microphone embedded in his ear canal, or the brain-computer interface threading sound directly to his language processing centre, bypassing both the cut nerve and the damaged tissue. The work of Q.

Moneypenny considered 004 the most experienced of her new generation of Double-0s.

Dryden closed the file and slid the tablet towards her. “What do you buy the man who has everything?”

“So, you think Bertram Paradise is a man for whom the world is not . . .” she trailed off.

A half-smile. “Something like that. Tech billionaire who claims his geo-engineering project can save us from the climate crisis, now Q discovers his chief science officer and head of security are missing and he’s regularly dropping money in shady accounts around the world? I’m not surprised the Treasury is worried. It’s either blackmail, or gambling. Suspicions of foul play in the missing persons?”

“Q says yes. This technology of Sir Bertram’s, Cloud Nine” — Moneypenny gestured at the tablet — “represents a significant disruption to the status quo. Since the Sixties, every decade has been hotter than the one before. If we stopped emissions tomorrow, which we won’t, the current emissions in the atmosphere would still drive up temperatures in the next decades. Modelling shows that if we continue business as usual, we could see a five-degree increase by the end of the century. Melting Arctic. Rising seas. Extreme storms, flooding, droughts, fires, deadly heatwaves. Add to that rapid urbanisation, poor land and resource management. We’re looking at pollution. Food and water insecurity. Decreased water, air and food quality, combined with disease vectors and water-borne pathogens. We are already seeing increased migration, with communities temporarily displaced into neighbouring territories by climate emergencies. After 2040, this will become permanent. Whole regions of the world will be unliveable.”

Moneypenny raised an eyebrow. “I’ve always loved your optimism, 004. Best-case scenario, a shift towards a global commons, in which we survive by the survival of others — sustainable, inclusive development that respects environmental boundaries, and is oriented towards low material growth and lower resource and energy intensity, driving down inequality across and within countries.”

“We stand on the brink.” Moneypenny raised both hands. “Two worlds that are divided by income, degradation of social cohesion, conflict, and unrest.” She closed her left fist. “One, a highly educated, internationally connected society that benefits from capital-intensive sectors and targeted environmental policies. This world exploits the other” — she closed her right fist — “poorly educated labourers working in highly intensive, low-tech sectors, while bearing the burden of environmental collapse.” She dropped her hands. “For some people, the brink was miles back. They exist in a closed bubble of superyachts and private jets. Or they just sold an organ to feed their family. All of this represents one of the most urgent threats to global security that we’ve ever faced.”

“Exactly. As time runs out, one camp is placing its faith in competitive markets driving rapid technological progress and development of capital as the road to a sustainable future. Calls for geo-engineering — large-scale interventions in the Earth’s natural systems — from states and nonstate actors are growing more aggressive. Sir Bertram is answering the call.”

Dryden frowned. “I heard his family money comes from mining.”

“Yes — a long line of imperial ‘speculators’ with interests in mining, from diamonds to today’s rare earth metals.” Moneypenny gestured at the damp newspaper. “Paradise says his forefathers grew rich taking from the earth on the backs of those they deemed less human. Cloud Nine is his atonement. He promises to use his fortune to heal the Earth.”

“Until now, geo-engineering research has been academic, existing almost entirely in computer models. Sir Bertram is the first to attract large-scale funding and more or less international backing to undertake live tests.”

“In the army, more or less support leaves you stranded without back-up behind enemy lines.”

Rain swept in sudden static against the window. “If the Cloud Nine tests go wrong — if anything goes wrong — we are looking at blowback and increased risk of global unrest. More than that, the side effects of geo-engineering are completely unknown. If there are victims, there will be blame. Where there’s blame, there’s grievance. It’s the government’s job to mitigate the climate crisis. It’s our job to mitigate conflict. And that’s putting it nicely. Maybe Sir Bertram is just as saintly as he seems. Maybe he isn’t. It’s your mission to find out.”

A loaded gun. Just tell me where to aim.

Moneypenny sat back. “Your old friend Luke Luck is on Sir Bertram Paradise’s security force. He’s been promoted since the head of security’s disappearance — a man named Robert Bull.”

Dryden held his breath, then seemed to go loose through his body, a mental shrug. “Guess I shouldn’t be surprised you know about Lucky Luke.”

“We can do the surprise portion of the conversation, if you’d like. Or we can just get right down to it.”

He crossed his legs at the ankles. “Luke was more than my friend.”

“I know. You served together. Won the Army Boxing Inter-Unit Championship together. And loved each other.”

“You make it sound easy.”

“Yes. Robert Bull’s sudden disappearance does not augur well, especially combined with Dr Zofia Nowak’s. She’s credited with designing Sir Bertram’s computer and cloud-seeding device, though only in whispers. Now she’s gone. Our fear is that Sir Bertram’s whole set-up is under attack. Another actor, state or otherwise, have got him in their pincers enough to bleed him for a fortune. It could be that he’s trying to pay for Dr Nowak’s release. It could be something else entirely. Whatever it is, he’s not asking for help. I need you to convince Mr Luck to recommend you for the security team, without him realising what you’re really doing. He thinks you went into private security, too, yes?”

“He blames me for not getting him a job when he discharged out.”

“Well, now the tables have turned. Let’s hope he’s in a forgiving mood. I want you at the heart of Paradise’s operation. Discover his vulnerabilities. Where is Dr Nowak? What happened to Robert Bull? And is Cloud Nine vulnerable? If these large deposits are not the result of blackmail, what are they, and what does that mean for Paradise’s claims to be able to save the world? The clock is ticking. Extinction is not a theoretical possibility. It is a lived reality, right now. I’m not waiting for the sun to blink. No last-minute miracles. Humankind has a short window to act, and it’s closing. I want to keep breathing. How about you?”

Dryden stood up and smoothed his tie. He grinned. “With pleasure, ma’am.”

“Good.” Moneypenny turned back to her screen. “Go some rounds with Triple-0 and then check in with Q before you leave, make sure everything’s in working order.”

Moneypenny glanced up quickly, then smiled. “Who could resist you, Joe?”