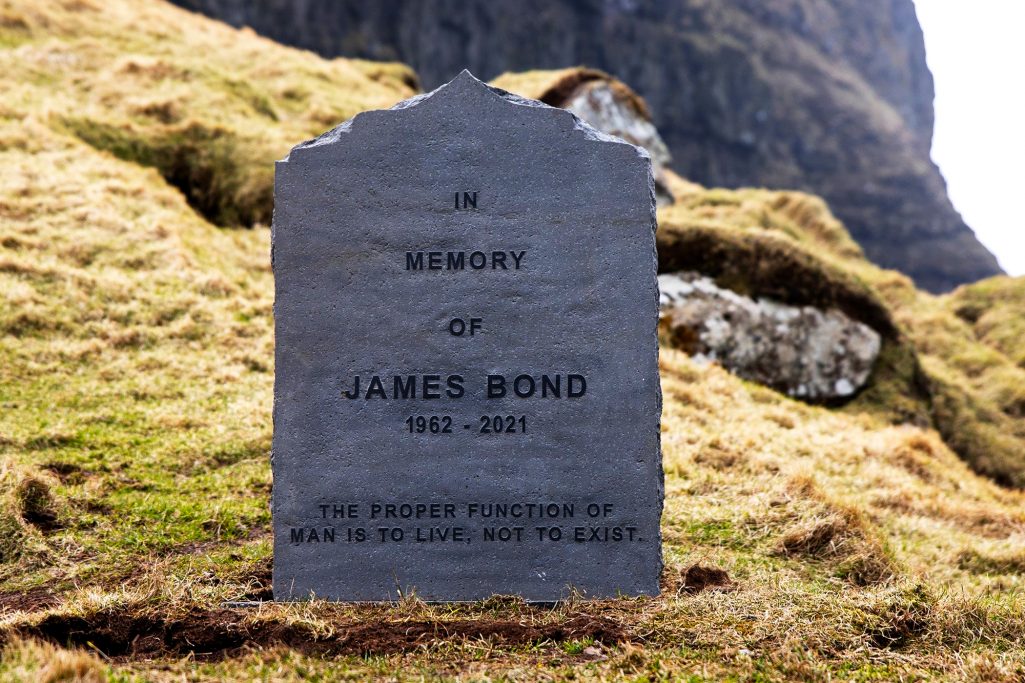 A headstone marking the last known location of Daniel Craig’s James Bond (and faithful companion Dou Dou) has been unveiled by Bárður á Steig Nielsen, the Prime Minister of the Faroe Islands, to commemorate the island’s iconic role in No Time To Die (2021).

Warning: This article contains spoilers for ‘No Time To Die’.

The dramatic landscape of the Faroe Islands provided the backdrop for the heart breaking final of No Time To Die, in which Bond, accompanied by Nomi (Lashana Lynch), travel to the Poison Island to confront the villainous Lyutsifer Safin (Rami Malek), with deadly consequences.

The scenes were filmed on location in the tiny village of Trøllanes, population 26, and on the Kallur promontory of Kalsoy Island – one of the eighteen mountainous islands that comprise the Faroes archipelago located in the Northeast Atlantic, halfway between Scotland and Iceland.

Many of the islands features, including the Kallur Lighthouse and charming village of Trøllanes were substantially altered or edited out in post-production, in favour of the brutalist industrial architecture of Safin’s Poison Garden.

The headstone was cut from Faroese basalt by an acclaimed stonemason from the local company Føroya Grótvirki, based in the village of Skopun on Sandoy Island, and designed to resemble the headstone of Bond’s parents (Andrew Bond and Monique Delacroix Bond) briefly seen in Skyfall (2012).

Due to the rugged terrain, the headstone had to be transported onto the island via helicopter and taken to the Kallur Lighthouse, before being erected near at the exact location Bond meets his fate.

The headstone is dated 1962-2021 — the years the first and 25th James Bond films were released — and has been engraved with the quote read by M (Ralph Fiennes) at the end of No Time To Die: “The proper function of man is to live. Not to exist.”

The quote, originally by American author Jack London, was also used by Ian Fleming in the book You Only Live Twice (1964), as part of an obituary, when Bond, missing, is believed to have been killed while on an official mission to Japan.

The idea for the headstone came from Jóhannus Kallsgarð, a local sheep farmer based in the village of Trøllanes, near the island’s northern tip. Described in the films credits as ‘The King of Kalsoy’, Johannus served as the location co-ordinator, and was integral in finding the filming spot, guiding those who wanted to climb to the lighthouse, and co-ordinating the movement of equipment.

Today, Kallsgarð also runs the official James Bond Faroe Islands Tour in collaboration with Guide to Faroe Islands, which takes tourists to all of the No Time To Die filming locations in the Faroe Islands, including James Bond’s headstone near the Kallur Lighthouse. The tour is available all year round, and costs 2,300 DKK (AU $450).

New Land Rover Defender to Feature in ‘No Time To Die’