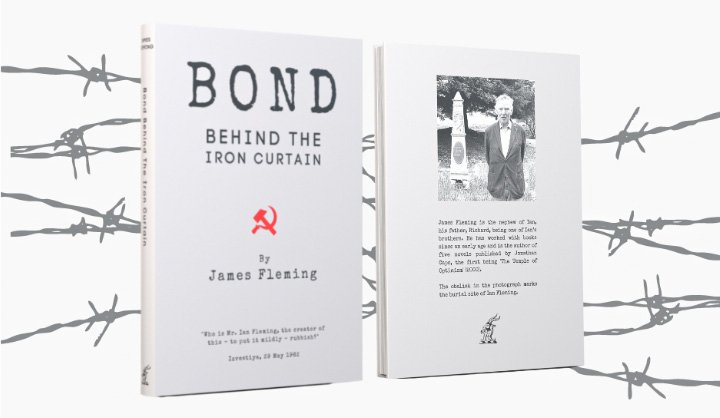 Just when you thought there was nothing left to say about James Bond or his creator, Ian Fleming, comes Bond Behind the Iron Curtain by James Fleming (Ian Fleming’s nephew) which looks at the world’s most famous secret agent from a completely different angle: through the eyes of the communist bloc.

Even before the film of Dr No was released, the Bond phenomenon was being attacked as pornography, capitalist filth and anti-socialist poison. Its popularity in the West only stoked Russian derision. This book perfectly captures the political face of Bond through rarely seen images and a variety of texts translated into English for the first time. What makes it of exceptional interest is that much of the Russian ridicule of the figure of Bond in the 1960s has turned out to be extremely accurate. Nor is it without humour: how the KGB tried to sell a novel in London in which Bond is killed, how the 007 trademark came to be downgraded to 07, how much he was paid for Dr No – in short, Bond Behind the Iron Curtain is introducing readers to a completely unknown side of Bond.

The book is written and edited by James Fleming, one of Ian Fleming’s nephews, an author in his own right and editor of The Book Collector, the literary quarterly Ian set up around the same time as he created Bond. James says: “I think I have been aware for some time that a review of one of Uncle Ian’s books had appeared in Izvestiya. At the end of May 1962, before the Dr No film came out, this extraordinary review appeared in the Soviet newspaper denouncing 007 and Fleming, but it was only when I started researching for this book that I finally managed to lay my eyes on a copy of it. Interestingly, Ian’s publisher Jonathan Cape considered printing the review on the dust wrapper of On Her Majesty’s Secret Service and a proof copy was printed, but in the end, I believe, they were all binned.”

The book starts with this full-page attack on James Bond, Ian Fleming and the film of Dr No that appeared in Izvestiya even before the film had been released. The book also includes the first ever translation of the long Russian critique of the Bond films by Maja Turovskaya published in 1966, and the extremely interesting account that appeared in Prague the following year of Sean Connery’s rise to fame. A bonus is the Bulgarian attempt to publish a novel in which Bond was killed.

The ‘bourgeois inferiority complex’ was the standard party line to mock anyone who enjoyed the adventures of James Bond, and if you want to learn more about how Bond was viewed behind the Iron Curtain, this is the place to start – the only place, as it happens.

‘Bond Behind the Iron Curtain’ by James Fleming will be published by the Book Collector on 20 October, 2021.

‘CÔTE D’AZUR: Exploring the James Bond Connections in the South of France’ by Simon Firth