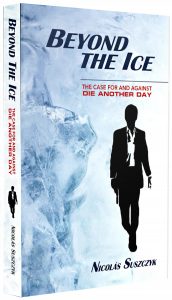 “This book is not a blind defence to ‘Die Another Day’. This is not even a tribute to the 20th James Bond film or a subjective appreciation of it. This is just a book that intends to give a second look to a film that is ranked quite low in the list of filmgoers or 007 fans”. With these words, author Nicolás Suszczyk (‘The World of GoldenEye’, ‘The Bond of The Millennium’) begins to assess the fourth and final James Bond film starring Pierce Brosnan and released in November 2002 as the series reached its ruby anniversary, also taking into account the sociocultural context of the early days of the new millennium in an era divided between the fear of terrorism and the leisure provided by new forms of technology. ‘Beyond The Ice’ deconstructs ‘Die Another Day’ as no book has done before and explains why there is more to Bond 20 than an invisible Aston Martin Vanquish and 007 surfing a computer-generated tsunami.

Beyond the Ice: The Case For and Against Die Another Day will be independently published via Amazon Publishing on Thursday, 18 June, 2020.