The launch, originally scheduled for March 2020, was delayed due to the postponement of No Time To Die (2020).

In their latest official collaboration, Orlebar Brown have drawn inspiration from the early Bond films featuring Sean Connery, George Lazenby and Roger Moore, recreating a number of iconic looks for a modern audience.

The newest editions to the 007 Heritage Collection are not exact replicas of looks worn on screen, but rather take inspiration from iconic looks, and reinterpret them for a modern audience. 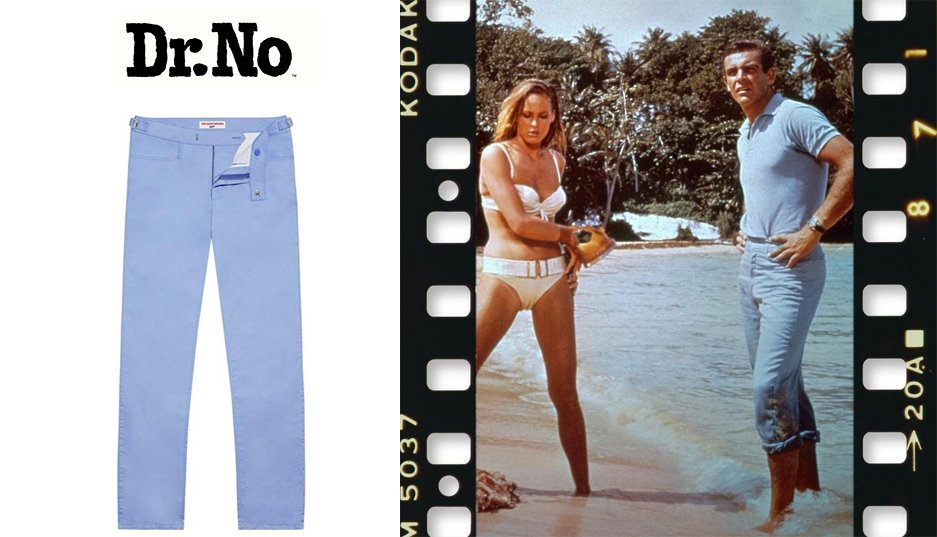 To honour one of the most famous scenes in the film, we recreated the Riviera Blue trousers Bond wears when he meets Honey Ryder on Crab Key Beach. The washed Portuguese cotton creates an antiqued finish while our signature side fasteners add the O .B touch. 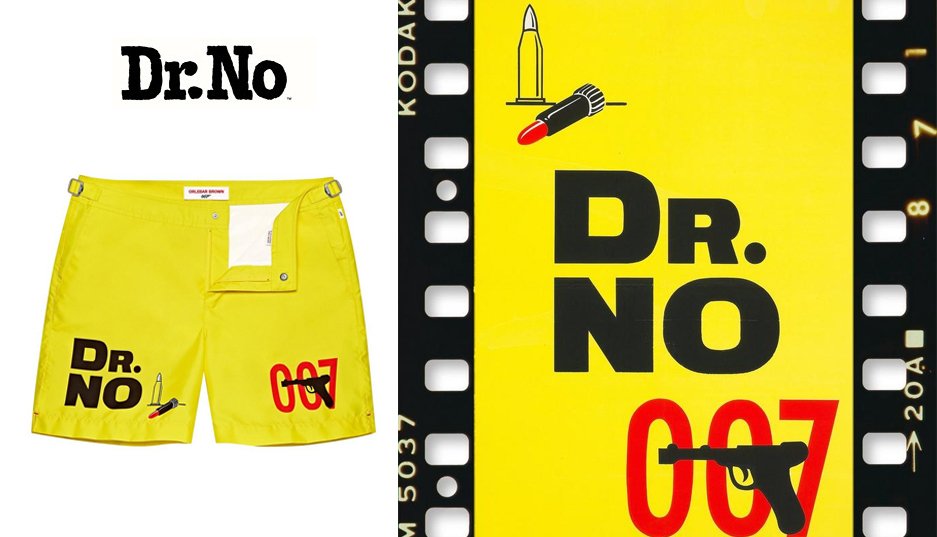 The print featured on these swim shorts is an adaptation of the first poster to be released to the public as a teaser before the release of ‘Dr. No’, featuring Joseph Caroff’s logo of a pistol overlaying Bond’s codename 007.

The tailored swim short is where it all began for Orlebar Brown; designed to give you effortless style wherever you are. Based on the pattern of a man’s traditional tailored trouser with signature side-fasteners to adjust and crafted from fabric that dries quickly, the OB Classic Bulldog offers the perfect blend of form and function. 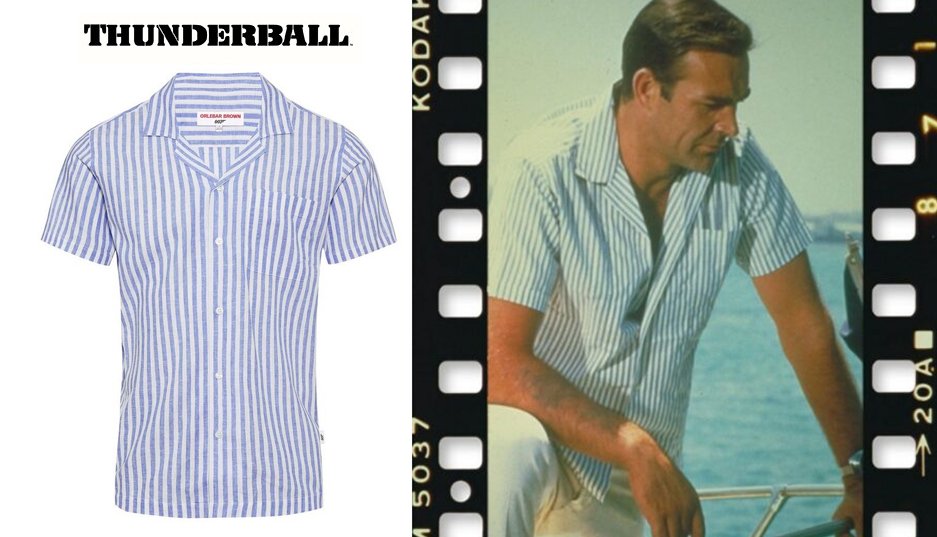 Worn aboard a helicopter with Felix Leiter while searching for Vulcan and later during his visit to Largo’s Palmyra estate in ‘Thunderball’, Bond’s butcher stripe shirt has often been imitated. Ours is not only authentic in design, but in quality, with an expertly tailored silhouette and Capri collar in Spanish cotton. 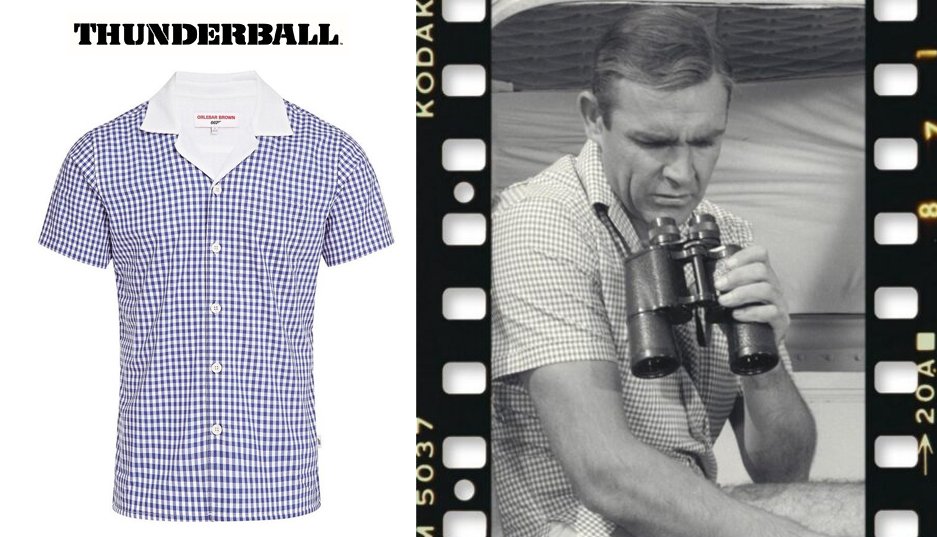 Inspired by Bond’s helicopter journey in ‘Thunderball’, the blue and white gingham pattern with a Capri collar stay true to the original style. 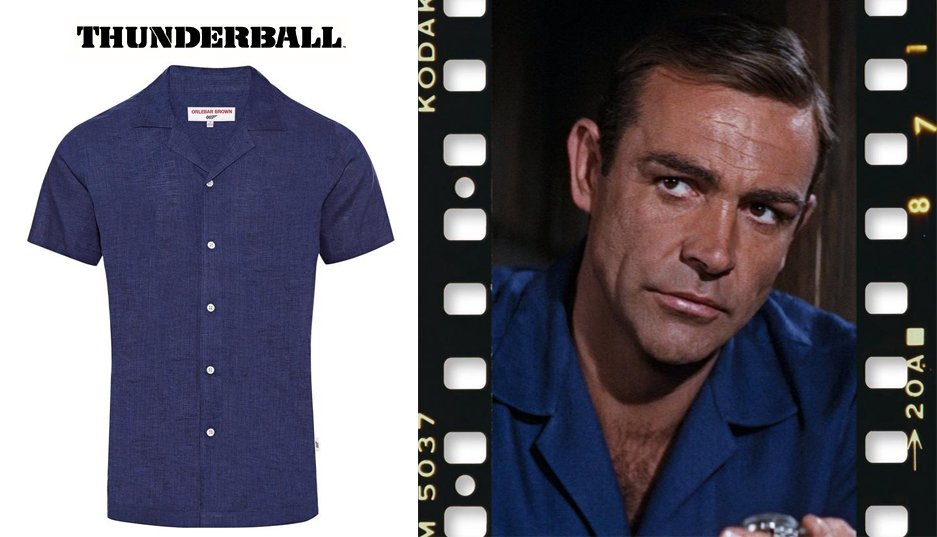 This men’s shirt in Italian-woven saturated blue linen fastens with imitation mother of pearl branded buttons. Featuring a Capri collar, it brings the style worn by Bond in the Bahamas in ‘Thunderball’ back for modern-day resort wear. 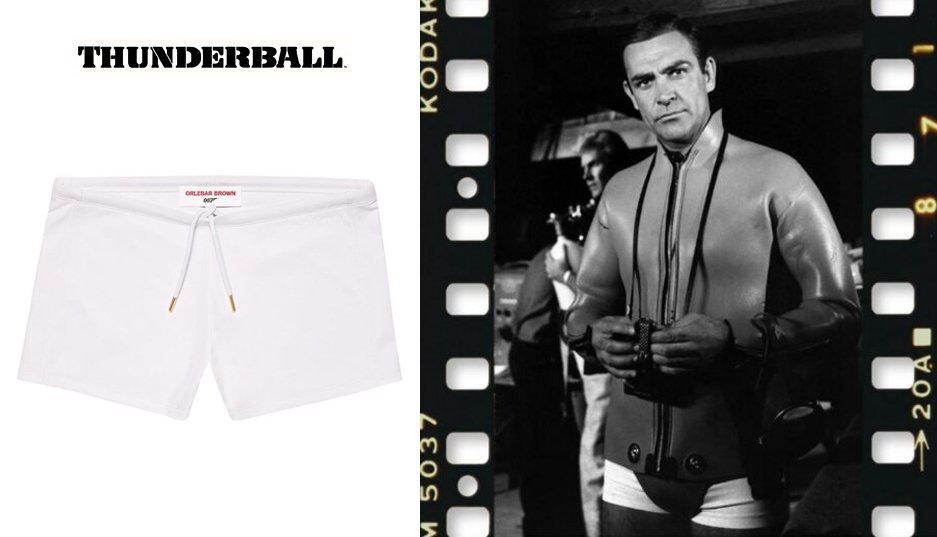 The traditional dye of these Springers balances out their shorter shape and keeps them smart. Our shortest swim short. Tailored swimwear is designed to give you effortless style wherever you are. Based on the pattern of a traditional man’s tailored trouser and crafted from quick-drying polyamide fabric with signature side-fasteners to adjust our OB Classics offer the perfect blend of form and function.

Each pair comes with a durable water-resistant drawstring bag to protect your shorts or store your valuables by the pool. 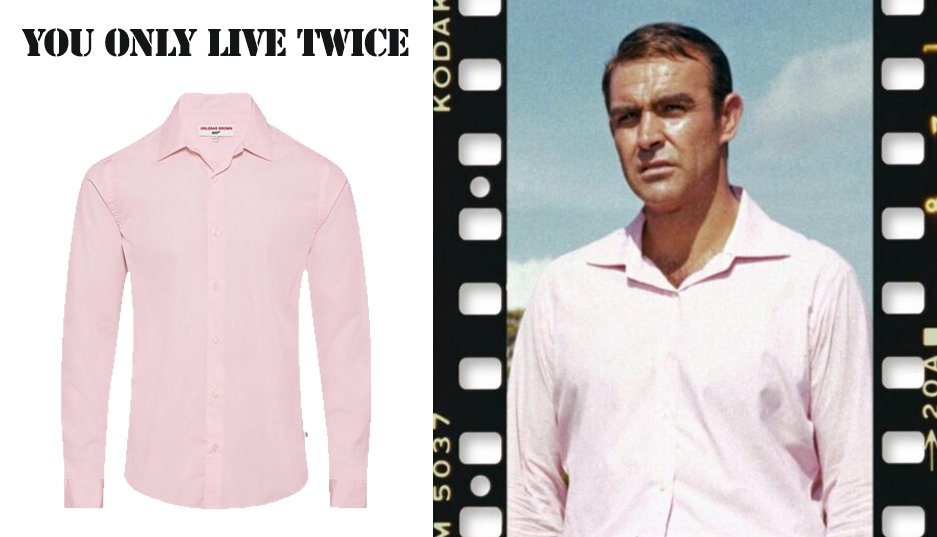 An Italian linen shirt in a whisper pink shade of Rosebud, inspired by James Bond’s version in ‘You Only Live Twice’. 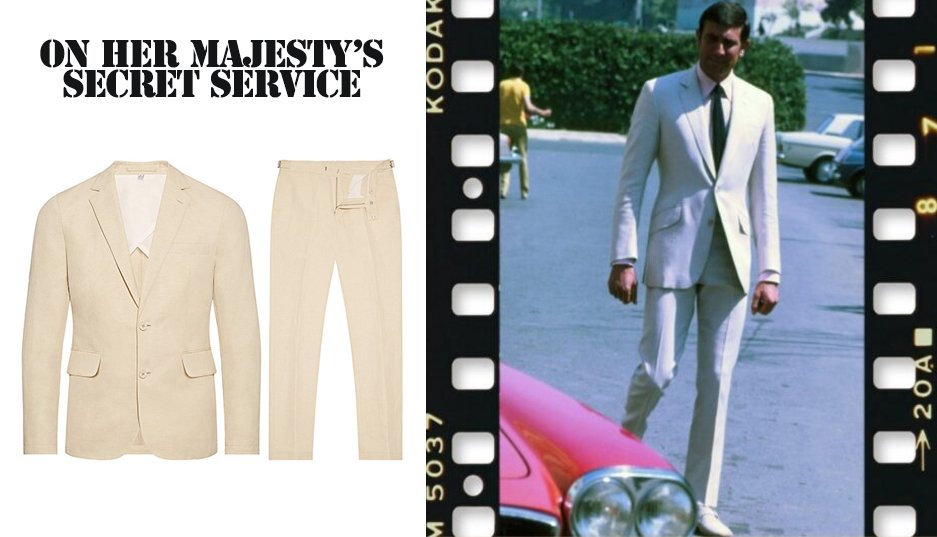 Perhaps the most prized creation in our collection is the cream linen-cotton suit from ‘On Her Majesty’s Secret Service’. Bond wore it together with a light pink shirt in the scenes at the Portuguese hotel before meeting Countess Tracy di Vicenzo. In a design like the original, the tailored blazer features a two-button placket, twin flap pockets at the hip, and a single welt pocket on the chest for sunglasses, or perhaps a clever gadget. The matching trousers also boast a tailored fit while the flat front keeps the style modern. 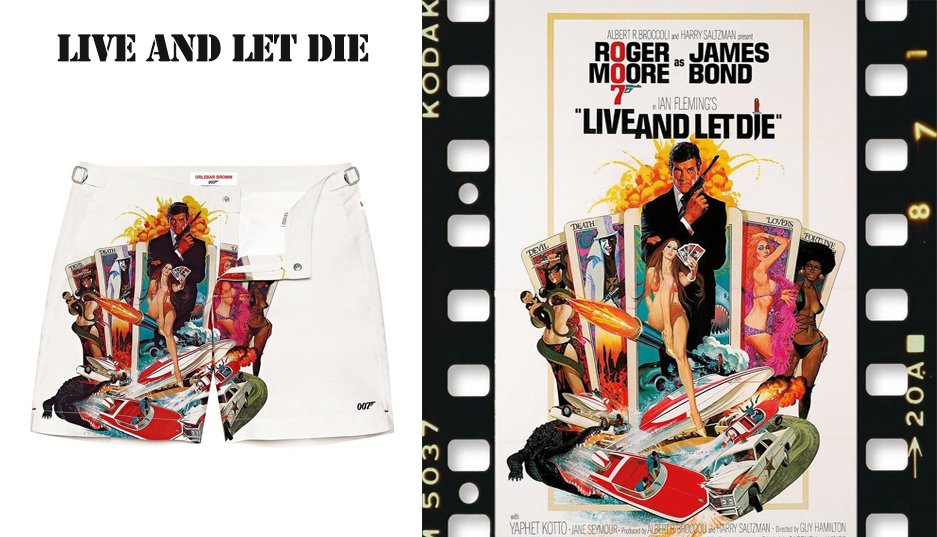 These white Bulldog swim shorts feature a 1973 illustration depicting James Bond in ‘Live And Let Die’ by Robert McGinnis; undoubtedly a conversation starter for any fellow 007 fans you might meet on your travels. Artwork: 1973, Artist – Robert McGinnis (United Artists)

The tailored swim short is where it all began for Orlebar Brown; designed to give you effortless style wherever you are. Based on the pattern of a man’s traditional tailored trouser with signature side-fasteners to adjust and crafted from fabric that dries quickly, the OB Classic Bulldog offers the perfect blend of form and function. 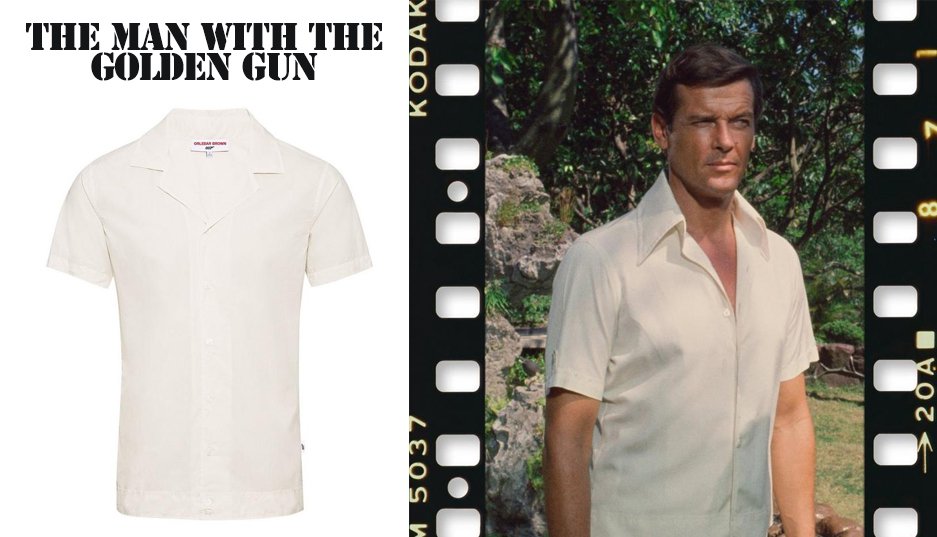 This men’s cotton shirt is inspired by the one worn by Bond in ‘The Man with the Golden Gun’, where Bond enters Hai Fat’s estate posing as Scaramanga in a cream monochromatic outfit. With its Capri collar and buttoned side-adjuster tabs that are true to the original design. 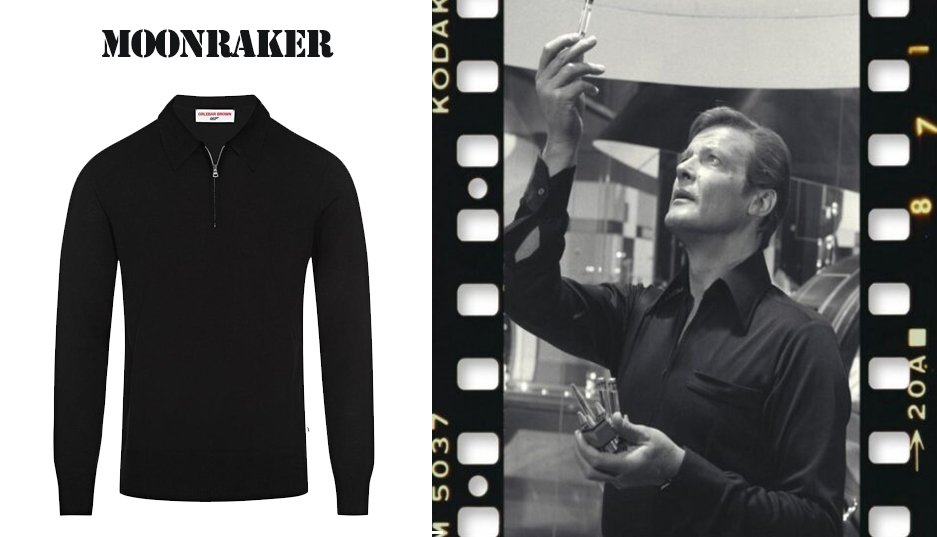 While on a night mission which results in a sword fight with Drax’s henchman Chang, Bond pulls on a half-zip black shirt to help him hide in the shadows. Our version mimics the tailored fit of the original, but the nickel-effect zip and ribbed collar keep the piece sporty and the twelve-gauge Italian merino wool adds a luxurious touch. 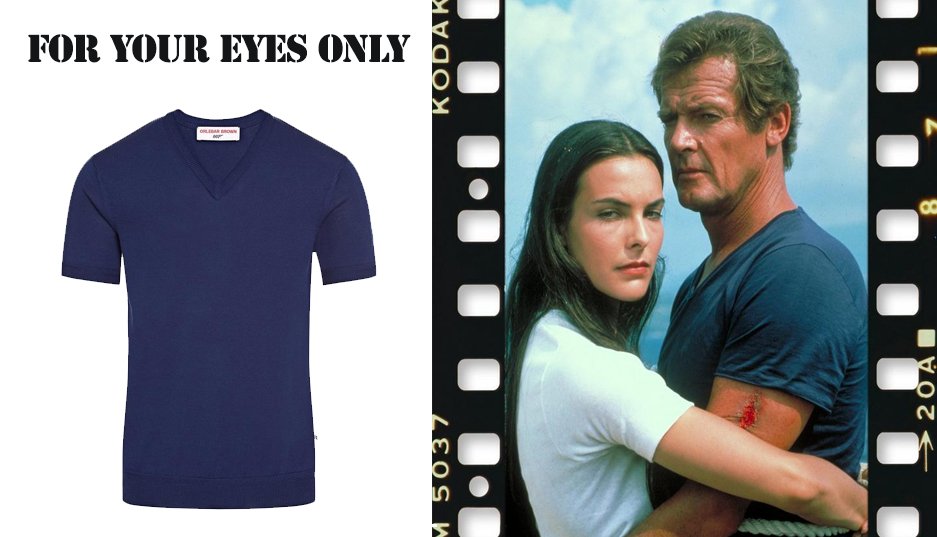 As t-shirts are not often seen on James Bond, you can guarantee quality and cut are paramount to make it into the wardrobe of the world’s most famous fictional spy. We’ve reimagined the style seen in ‘For Your Eyes Only’ with an Italian-made blue cotton-silk V-neck, cut into a tailored fit and finished with chevron detailing. 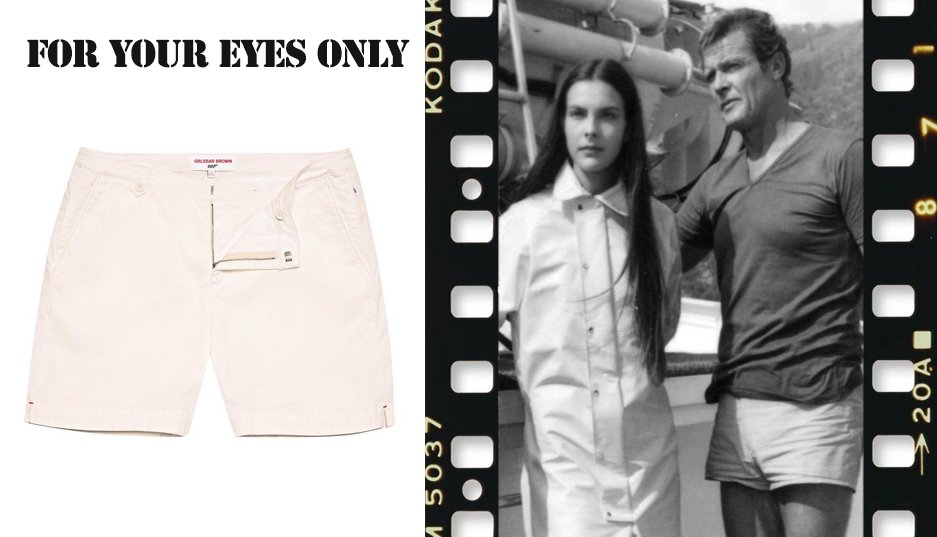 These men’s ivory day shorts in cotton-linen blend fabric have pared-back design features allowing for maximum versatility. Inspired by James Bond’s style in ‘For Your Eyes Only’, they can be casually styled with a cotton tee or smartened up with a linen shirt. 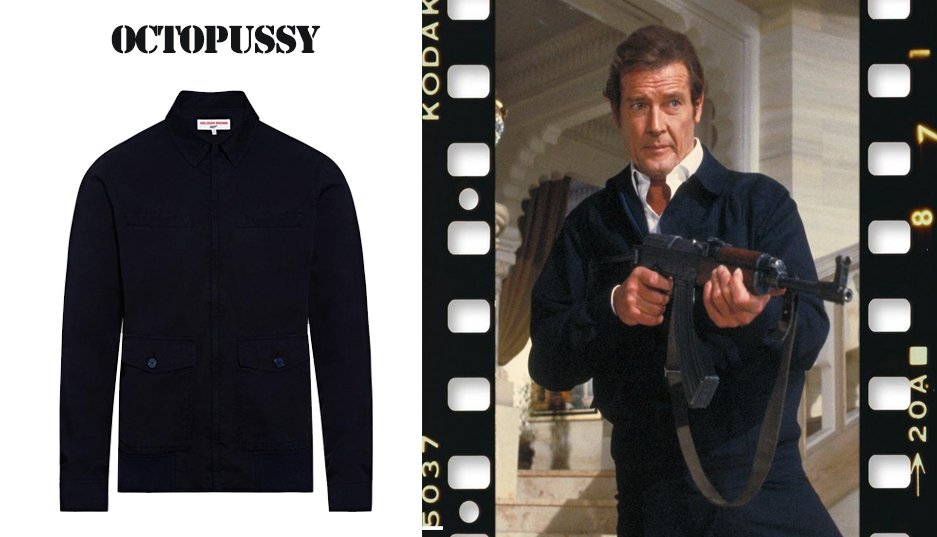 During an assault on Kamal Khan’s palace in the film, Bond requires a practical jacket that is stylish enough for the job. We recreated the Midnight Blue Harrington Jacket worn in the scene using Portuguese cotton and a nickel-effect zip closure. Adjustable button cuffs and four front pockets in welt and flap designs bring a functional edge.

Like Loading...
Tagged: Dr No For Your Eyes Only George Lazenby Live and Let Die Moonraker Octopussy On Her Majesty's Secret Service Orlebar Brown Roger Moore Sean Connery The Man with the Golden Gun Thunderball You Only Live Twice

Ian Fleming Apparel from Out of Print