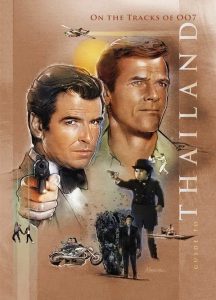 When EON Productions choose Thailand to be the main setting for their ninth James Bond adventure, The Man with the Golden Gun (1974), they entered unexplored territory. After filming the dusty streets and dirty khlongs of Bangkok, the production moved southwards to the magical islands of Phang Nga Bay. When the movie came out, a worldwide audience saw its first glimpse of the beautiful country and overnight everything changed. “We put Phuket on the map!”, director Guy Hamilton would later claim. And he was right. Clever tour operators rebranded the visually stunning Khao Phing Kan to James Bond Island and made it one of the most visited James Bond filming locations in the world. In 1997, the film makers returned to both Bangkok and Phang Nga Bay, to film exciting parts of Tomorrow Never Dies (1997) here.

Apart from the basic touristic information, James Bond’s GUIDE TO THAILAND will give you clear directions to find all the Thai filming locations used in the two movies. With this book you can retrace all the action: From the route of Roger Moore’s long tail boat through the khlongs to Pierce Brosnan’s and Michelle Yeoh’s motorbike chase through the narrow Bangkok alleys. From the long lost Astro Spiral Jump location in Rangsit to the impressive islands in Phang Nga National Park.

This full colour, 136 page travel guide includes general info on the country, detailed location maps, now-then comparison photos of all the locations and features a short introduction by Britt Ekland, who starred as Mary Goodnight in The Man with the Golden Gun.

‘On the Tracks of 007: Guide to Thailand: Revisiting the James Bond Filming Locations‘ will be published by the DMD Digital on Monday, 1 June, 2020.

Like Loading...
Tagged: Martijn Mulder On the Track of 007 The Man with the Golden Gun Tomorrow Never Dies