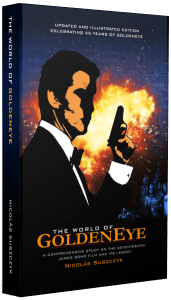 To celebrate the 25th anniversary of the 17th James Bond film, a new edition THE WORLD OF GOLDENEYE, by Nicolás Suszczyk, has been released. This edition offers an image gallery, illustrations, expanded and additional chapters and a mini-encyclopaedia with over 700 entries covering all things GOLDENEYE, from the World War II operation planned by Ian Fleming to the 1995 film and its video game versions released between 1997 and 2011. It also features two exclusive images of the video game fan project GOLDENEYE 25, which will be out in 2022, as well as some more scoops on this project.

‘The World of GoldenEye‘ Updated and Illustrated Edition will be independently published via Amazon Publishing on Tuesday, 24 March, 2020.