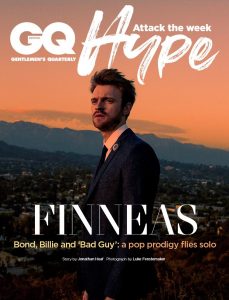 In a new interview with Britsh GQ, Finneas details the creative process behind creating the No Time To Die title song with his sister Billie Eilish.

Asked how the siblings lands the gig, Finneas says “Well, it’s not like Barbara calls you up and you are asked to write a James Bond song. You write the song, and then they tell you whether it’s going to work. It’s not yours until it’s approved for the movie.”

Finneas reveals, that they wrote No Time To Die while on tour. “Specifically, in the bunks of our tour bus. We were given the first 20 pages of the script. I guess that’s up to the point when the song comes in during the movie, right? That’s how all the Bond films open up. So we were able to read the first 20 pages, which was obviously incredible. It gave us such a good steer and such insight into where the song would fall, and the tone. It makes it easier than having to write the whole song based on the entire movie; or in fact none of the movie.”

Generally speaking, the rule of thumb is, one page of the script is equal to about one minute of screen time. This suggests that the duo were able to read the films pre-title sequence, which could run for approximately 20 minutes.

Once they had written the song, Finneas tells GQ, that they “Recorded the demo, sent it to them and then we finished it in London with Hans Zimmer doing the orchestral arrangements and also Johnny Marr from The Smiths.”

First Look at Léa Seydoux in ‘No Time To Die’