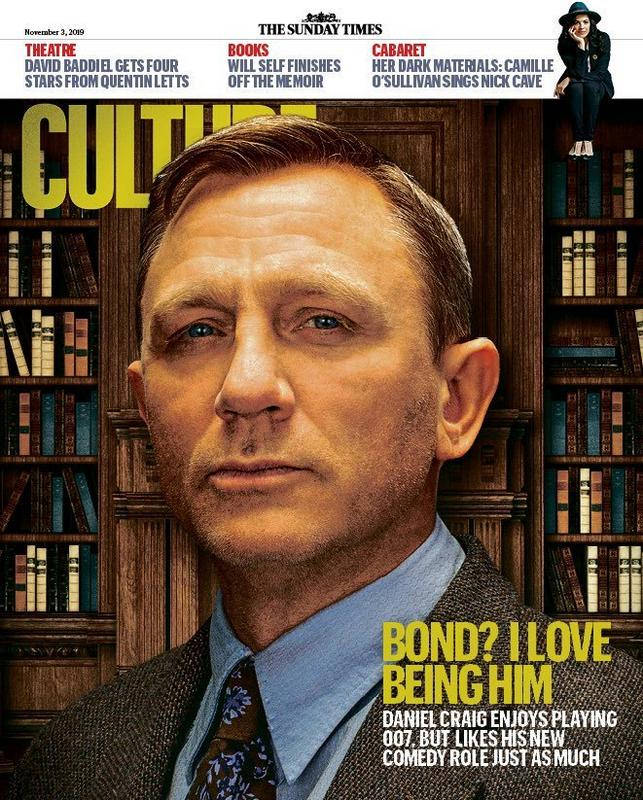 In his first major interview in two years, Daniel Craig recently spoke to the Sunday Times Culture Magazine about his new film, the whodunit murder mystery Knives Out (2019), working with Phoebe Waller-Bridge, loving his time as James Bond, and pulling out all the stops on No Time To Die (2020).

After the disappointing reception SPECTRE (2015) received four years ago, rumours have since swirled in the press about the future of the franchise, it’s place in the #MeToo era, and a possible successor to Craig. However, despite now infamous misread comments following the release of SPECTRE, Craig was always contracted to do another Bond film, something that he confirmed back in 2012 in an interview with Rolling Stone.

After two less than successful box office outings in Logan Lucky (2017) and Kings (2017), and rave reviews in an off-Broadway production of Othello (2016 – 2017), Craig is firmly back in Bond mode, “This may be hard to believe, but I love the fact I’m Bond. We’re in rare air, making Bond movies. It is one of the most intense, fulfilling things I’ve ever done, but it takes a lot of energy and I’m getting old. I’m getting creaky. And so what I do outside of that has got to be really good.”

As for what audiences can expect when No Time To Die hits cinemas in April 2020, “We’re trying to make the best f****** Bond movie we can. Pulling out all the stops. If we aim for the stars, we might hit the treetops.”

Craig does however, let a little detail slip, “Well, I’d like to give you a breakdown of my week, but people would just think I was complaining. But every day has an intensity to it. Pausing briefly, “The most interesting thing? Yesterday I was up to my neck in water for 12 hours.”

The comment adds credence to rumours that a major underwater sequence takes place in No Time To Die.

Craig has once again been instrumental in attracting top notch talent to work on Bond, this time it’s the in demand actress-writer tour-de-force in Phoebe Waller-Bridge. “She’s just brilliant”, he says. “I had my eye on her ever since the first ‘Fleabag’ [TV series], and then I saw ‘Killing Eve’ and what she did with that and just wanted her voice. It is so unique — we are very privileged to have her on board.”

With Hollywood now entering an era of “equality”, many have queried whether or not Waller-Bridges hire was simply to check the gender equality box, she is after all only the second female screenwriter in the franchises 57-year history. Craig however, refuses to be drawn into a conversation about her gender, saying “Look, we’re having a conversation about Phoebe’s gender here, which is f****** ridiculous. She’s a great writer. Why shouldn’t we get Phoebe onto Bond? That’s the answer to that. I know where you’re going, but I don’t actually want to have that conversation. I know what you’re trying to do, but it’s wrong. It’s absolutely wrong. She’s a f****** great writer. One of the best English writers around. I said, ‘Can we get her on the film?’ That’s where I came from.”

Craig continues, “She has been asked many times about what she is going to do, and her answer is that we’re not really going to change anything. He’s James Bond.”

Daniel Craig can next been seen on the big screen in ‘Knives Out‘, opening in Australian cinemas on 28 November, 2019.

New ‘No Time To Die’ Still Featured in Total Film