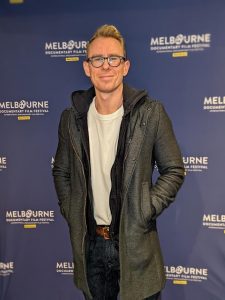 Matthew Bauer is an Australian born filmmaker who graduated from NYU Tisch School of the Arts with a Masters in Directing under the tutelage of Oliver Stone and Todd Solondz. Raised on a diet of James Bond films, labyrinthine thrillers and Errol Morris documentaries, Bauer’s interest in film grew in high school where he made a number of short films, including Surveillance – a queer take of Alfred Hitchcock’s Rear Window – and the mockumentary, Fakes.

Following its Australian premiere at the Melbourne Documentary Film Festival, we spoke to director Matthew Bauer about The Other Fellow – an energetic exploration of male identity via the lives, personalities, and adventures of a diverse band of real men across the globe all sharing the name James Bond.

The idea for the documentary came about because a simple thought entered your mind, “What would it be like to have the name James Bond?” What was it about this thought that intrigued you so much you began to explore it in depth and turn it into a feature length documentary?

I guess it was subconscious but as a Bond fan I’m very aware that it’s a character who is also a male lifestyle brand. You look at the top Bond fanpages such as The Bond Experience or Bond Lifestyle – they are not news about James Bond as much as lifestyle tips of how to live like the character. I think that’s very unique to James Bond, and this aspect is what intrigued me to ask “what’s it like to actually be James Bond” as much as the name aspect – which is really just the entry point.

Before commencing work on this documentary, were you aware of the ordeals and hardships faced by people who share a name with a famous fictional character?

Was it difficult to find willing James Bonds to participate in the documentary? Or were they glad to finally be able to tell their story and what it’s like living with one of the world’s most famous names?

It tends to be geographical – American’s tend to say yes, whereas in Europe people are warier – as they should be. Even our James Bond who was on trial for murder said yes without hesitation. As you’re a Bond site you might enjoy that on the set of The Living Daylights in Gibraltar there was a British Army man named James Bond stationed there who was brought out to meet Timothy Dalton. I tracked him down but he kept ignoring my letters, I finally went to his house where his wife told me to leave them alone and he didn’t want to do “my stupid movie”. She then explained I was not the first person to try contacting him, and they’d had lots of similar requests in the intervening years from the British press. This is a good example of what it’s like to be James Bond.

How did their experiences impact the direction the documentary took from what you had originally envisioned?

Massively so. I thought it would be all martini jokes, but their stories were quickly about identity confusion and dealing with the police, the media and in one case with a stalker. I have to avoid spoilers but in regards to the stalker, the final James Bond you meet in the film is the first person who wrote back to me. Hearing that insane story made me decide we had a film – if you’ve seen The Other Fellow already you’ll know what I’m talking about.

The film is an exploration of hyper-masculinity, identity and life in the shadow of the “Bond phenomenon”. Why do you think people are so quick to judge? Why is there this need to compare and associate someone’s identity and qualities with those of the famous character whose name they share?

Because people are awful! No, I mean I guess it starts at school where kids really can be awful. Why do people do it? I guess it’s because we have a need to converse and communicate and connect. We need to fill the silence with something. If someone has just told you their name is James Bond that’s obviously what you’d fill it with. Maybe a Buddhist monk would be better about this, but then again maybe not – the Bond phenomena is everywhere. One of our guys actually said the worst time he had was in Japan.

During an interview with Peter Krausz from Movie Metropolis, you note that the American James Bonds were happy to appear in the documentary, while their European counterparts, asked “Why on Earth would I want to be in a film?”

Was this cultural and geographic divide something that was prevalent throughout the film? Did people in different cultures and geographic regions have different attitudes and experiences to being named James Bond? Did people’s reactions to meeting them differ, or are the quips about martinis, girls and guns a global annoyance?

I think we’ve covered this. I’ll add that when I contacted the final James Bond you meet in the film his family took out a police check on me when he told them “someone on the internet is looking for men named James Bond”. Again, if you know, you know.

Were you surprised that many of the James Bonds you encountered decided against changing their names? What were their reasons for keeping their birth name?

On one hand it’s a massive ask! People say that to them, but names are very personal and also very ingrained in our lives. Think of how hard it is when you change address and have to update all your information, or when you get a new credit card and have to update it everywhere. Changing your name is that times 100. But in addition, I think this is true for all our Bond’s who say they hate it – part of them kind of loves hating it, if that makes sense. For better or worse they wouldn’t know themselves without it.

Were you able to speak to any of the James Bonds parents to gain an insight into why they christened their child with one of the world’s most famous and recognisable names?

Yes, in many ways this becomes the central question of the film. And we’ll have to leave that one there.

Other than Gunnar Schäfer, owner of the 007 Museum in Sweden, were there any other examples of people who adopted the James Bond name as part of their owner identity? What were their reasons?

Yes, but in other ways. The black James Bond’s in our film are real alpha-males and tend to align most to and embrace the ‘Bond image’ actually. Our Guyanese James Bond is a bit of a cool dude, a bit of a player who says “you can’t be an introvert and be a James Bond – it’s impossible”. Our African American James Bond is similar – in a cut scene he said his world revolves around “money, cars and women”. It’s been said that James Bond was the ultimate modern ideal of the alpha male until the black American rapper ala Kanye or P. Diddy took that mantle sometime in the past couple of decades. There’s probably something in that – martinis, girls and guns are as common in a hip hop video as a Bond film.

In your research for the documentary, has there been any correlation in the increasing popularity of the film series and a decrease in the prevalence of people being christened with the name James Bond? Or have the figures stayed relatively the same?

You know I’ve always wanted to know that! We considered going down these more academic roads with the film – interviewing experts on demographics, genealogy and linguistics – but that was just never this film which is very occupied with its own characters and plot in the present moment. There was one James Bond who worked for Google who I wish we had of interviewed for the final film as his insight would have been very relevant to the events of the plot. 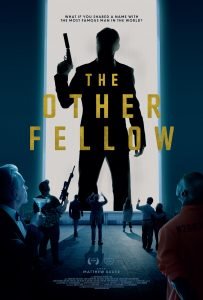 In the press release for the film, you note that “the goal was to make a film that entirely stands on its own, with its own story and unique cast of characters”. Yet the poster features the iconic image of the silhouetted man wielding a pistol that has long been associated with the character of James Bond. Talk us through the poster design, and what you hope it achieves.

I had that poster in mind since the start of shooting, and there’s a lot of imagery that mirrors it in the film. Whilst the film stands on its own, it isn’t some DVD extra, it is entirely about characters who live in the shadow of 007 and spend every day dwarfed by the ‘James Bond phenomena’. To me 007 is The Other Fellow of the title, and whilst he isn’t a character in the film, his almost ghost-like presence is felt in every scene.

What did you set out to achieve with this documentary, and what do you hope viewers take away from it?

I wanted to make a film that was quite unlike anything on screen before – especially in its texture. It’s a weird comparison but The Bourne Legacy is not dissimilar and I love how that film plays out whilst the events of Bourne 3 take place on TV screens and the airwaves in the background. That feeling was what I saw could be done with this, watching real people whose lives are affected by a pop-culture phenomena constantly playing in the background. As film experience, I hope people find it mind-bending! On a more thematic level, though, it really is just a film about a group of people united by a common issue. I hope the audience sees that through connecting with each other it gave these people a degree of healing (I won’t call it a quantum of solace…) and that’s a lesson that applies to human beings facing issues aside the incredibly specific issue this film looks at.

The film is currently touring the international film festival circuit. Are there plans for a wider cinema or streaming release in the future?

My favourite Other Fellow is one you won’t have seen in any of the clips or marketing for the film. If you’ve seen the film, you’ll know what I mean, but there’s a very major character whose appearance needs to be kept as a surprise for the audience.

Now that your first documentary feature is out in the world, what’s next in the pipeline for Matthew Bauer?

My next film is a documentary entitled ETHANOL about the world’s largest drug epidemic.

Interview with Jim Wright Author of ‘The Real James Bond’

Interview with Nicolás Suszczyk Author of ‘Beyond the Ice’