How 007 Got His Name
by Jim Wright

James Bond is in the news yet again. Many of the fellows sharing the name that Ian Fleming bestowed on his fictional secret agent back in 1952 are the subject of a new documentary, The Other Fellow.

The feature-length film, directed and co-written by Matthew Bauer, makes its Australian premiere at the Melbourne Documentary Film Festival on July 26. The sundry James Bonds who are profiled in the movie include a Swedish 007 super-fan, a gay New York theatre director, and an African-American accused of murder.

But who did Ian Fleming name his secret agent after – the guy who actually got the ball rolling? The answer is the “real” James Bond, a noted ornithologist with the Academy of Natural Sciences in Philadelphia. If Francis and Margaret Bond had not named their son James (with no middle name or middle initial) more 120 years ago, Bauer’s documentary would be about a bunch of other fellows with the same first and last name.

The Other Fellow includes a TV clip of Fleming “confessing” to the identity theft, as well as a re-created scene of Jim Bond and his wife watching Fleming on television as he owns up to the crime.

[For the record, the actual James Bond (1900-1989) was internationally renowned as the author of the landmark, Birds of the West Indies, which remained in print for nearly seven decades. Fleming, who wintered in Jamaica, noticed the author’s name on the cover “and simply stole it.”]

That has not stopped James Bond fans from espousing alternate origins of their own. The hearsay and speculation surrounding anything 007-related never end.

One of the oft-repeated theories is that Fleming took the name from a character in a 1934 Agatha Christie short story, The Rajah’s Emerald, published in a July 1926 edition of Red Magazine. The first line of the story: “With a serious effort James Bond bent his attention once more on the little yellow book in his hand.” True, but not the origin 007’s name.

Another popular theory: A friend of Fleming suggested that he generate the name from alphabetical lists of boys they knew at school. The friend told Fleming that the boys listed first at his school were James Aitken and Harry Bond, which could be combined to produce …. you got it.

Then there was this 1965 letter to the editor in The Atlanta Constitution from one W. E. Freeborn, who refuted an article that reported Fleming admitted he lifted the name “James Bond” from the cover of the bird expert’s book.

“That ain’t the way I heard it,” Freeborn wrote. “Mr. Olin Sewall Pettingill Jr., director, laboratory of ornithology, Cornell University, Ithaca, N.Y., once told me that Ian Fleming and James Bond met in the West Indies.”

“Ian Fleming liked the name James Bond and requested permission to use it in a series of stories that he was then considering. Mr. James Bond gave him that permission and, of course, you’re familiar with the rest of the story.”

“There is a postscript that might interest you. I noticed from the Directory of Post Offices that the zip code number for much of Puerto Rico, which is in the West Indies, starts 007.”

Wow. Two bogus factoids and one enormous speculative stretch in one letter to the editor. That’s hard to top.

The trouble is, none of the above explanations remotely reflects what Fleming himself had to say on the subject. There are at least seven instances that quote Fleming saying he took the name of the noted ornithologist James Bond.

Here are a few examples.

The February 1961 issue of Rogue Magazine: “There really is a James Bond, you know, but he’s an American ornithologist not a secret agent. I’d read a book of his and when I was casting about for a natural-sounding name for my hero, I recalled the book and lifted the author’s name outright.”

The following year, Fleming told The New Yorker: “One of the bibles of my youth was Birds of the West Indies, by James Bond, a noted ornithologist, and when I was casting about for a name for my protagonist I thought, My God, that’s the dullest name I’ve ever heard, so I appropriated it. Now the dullest name in the world has become an exciting one.”

In a 1964 interview with the Canadian Broadcasting Corp. at Goldeneye, Fleming said: “When I started to write these books in 1952, I wanted a really quiet, flat name, and one of my bibles out here is James Bond’s ‘Birds of the West Indies’, which is a very famous ornithological book indeed. I thought, ‘James Bond, that’s a pretty quiet name,’ and so I simply stole it and used it.”

In a quirk of fate, the real James Bond and his wife Mary visited Goldeneye unexpectedly the day of the interview. Fleming was uneasy at first, concerned that Bond was going to sue him for the name theft.

Once Bond and his wife had assured Fleming they weren’t litigious, they all got along famously. At the end of the visit, Fleming gave Bond a copy of his latest (and last) 007 novel, You Only Live Twice.

What more proof could anyone need?

The real Bond, by the way, was far from pleased that Fleming had summarily hijacked his name. As I wrote in The Real James Bond, the ornithologist increasingly became the target of 007 quips after Goldfinger debuted – from customs officials who wanted to know where Bond was hiding his pistol to hotel clerks giving him sly looks.

It didn’t help matters that Mary Bond, author of several books of poetry and fiction, began capitalizing on the Fleming connection. Her first effort was How 007 Got His Name, by Mrs. James Bond.

As Mary Bond noted in her memoirs, “The trouble was Fleming had stepped out of the picture and had left Jim holding the bag, and Jim wasn’t half as interested in getting some of his own [stature] back as in being left completely out of the limelight.”

What made Fleming’s theft of Bond’s name so galling that it wasn’t just coincidence. Bond was already an ornithologist with a global reputation. That distinction was not lost on New York Times drama critic Brooks Atkinson, a friend of the Bonds, who wrote to Mary: “I do think your husband and you have reason to resent his choice of the name — not by chance — but by stealing the name of the author of a book he had been reading.” 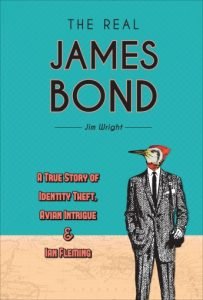 Jim Wright is the author of ‘The Real James Bond‘ (Schiffer Publishing, 2020). No one has stolen his name (that he knows of), although an anonymous thief once stole his identity and one of his credit card numbers. His blog about his book and Bond is here.

For more on the life of the real James Bond, check out our interview with Jim Wright.